Skylanders Villain Variants – They Do Exist…

For a while this was a bit confusing, but I think we're all slowly getting a handle on all the new information about Skylanders Trap Team.

Today I would like to address the idea of Villain Variants. Even though the Villains don't have physical figures, it appears that there will be variants.

This was made abundantly clear in a video Skylander Dad made with Lou Studdert at E3.

The major difference between the two is some red highlights on Riot Shield Shredder (the variant).

Here you can see Riot Shield Shredder in action as Skylander Dad demolishes the packaging of his E3 Exclusive.


Then in this second video you can see an encounter with the normal Shield Shredders (about 3:20).

Lou confirms this at 3:29 when he states:

Those are actually some normal Shield Shredders.


For the time being E3 is the only place Riot Shield Shredder will be available. Although, if you feel like spending a lot of money, there are already a number of these Exclusive Life Traps

See the E3 Exclusive variant helped me to understand what was going on with the Target Exclusive pre-order bonus. 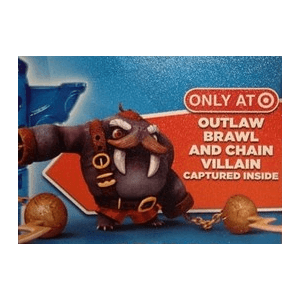 At first I thought that it was poor copywriting and they were being redundant calling him OUTLAW Brawl and Chain VILLAIN.

But it seems I was wrong.

His name is Brawl and Chain.

And Outlaw is the modifier/adjective of his variant form.

It's just like Riot, Legendary, or Jade. I just didn't realize that they were creating Villain Variants at the time. Now it makes a lot more sense.

So I think it's safe to say that we will be seeing more Villain Variants, but who or where remains to be seen.