What are Chase Variants?

NOTE: The term Chase Variant is used very loosely here when compared with other collectible industries. For Skylanders, a more accurate term would be “non-in-game variant”. However, over the years Chase Variant has become the term of choice amongst Skylanders fans.

A Chase Variant is a variant figure whose appearance in the game does not vary from that of their regular figure.

How can I spot a Chase Variant?

Chase Variants are pretty easy to spot because they are typically one solid color. As you might expect, there are exceptions to this rule, but the variants are quite noticeable. 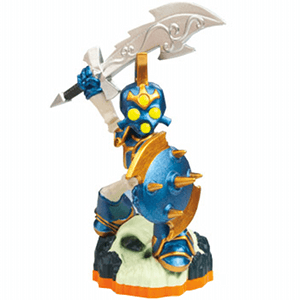 While you can find the complete list of Chase Variants for each of the games on the pages below, I must warn you: Because Chase Variants sometimes just receive a different paint job and fans value them so highly, they have become a target for scam artists.

If you plan on collecting Chase Variants, especially since they don't come cheap, you need to be very careful.

How can I tell if a Chase Variant is Fake or Real?

Unfortunately, there is no fool-proof way to identify real Chase Variants. Activision did try to build in a “security system”, but it can still be manipulated.

Chase Variants will also appear as “Special” or “Rare” when they are placed on the Portal.

Where can I find Chase Variants?

The original Chase Variants were figures that were inserted into random shipments as they were sent out to the stores. Then as the name suggests fans could “chase” them down and add them to their collection.

Unfortunately, over the years store employees have figured out that these variants can be quite valuable. So many of the Chase Variants never even make it to the shelves as Activision intended.

To make matters worse, companies like GameStop have started removing Chase Variants from their shipments at their warehouses. Then they sell the variants in larger bundles on their website. This is why you will never find a Chase Variant in a GameStop store.

While some lucky fans have still been able to find Chase Variants in stores, it is becoming more and more rare.

As I mentioned at the beginning of this article though, in Skylanders the term Chase Variant is often used to describe all non-in-game variants. With this is mind, some Chase Variants can occasionally be acquired through Frito-Lay promotions and trade shows (such as E3 and Gamescom).

In the long run though, if you plan on collecting all the Chase Variants that have been made, you will eventually need to rely on third-party sellers on sites like eBay and Amazon.