What are In-Game Variants?

In-Game Variants are a variant form a Skylander that appears the same on the screen as it does in real life. They are the opposite of what we refer to as Chase Variants.

Let's look at a recent example. On the left we have Trap Master Krypt King. On the right we have his in-game variant, Nitro Krypt King. 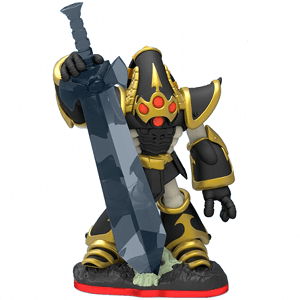 Now, if we take a look at these figure in the game, you will see that Nitro Krypt King appears in his variant form.

How do I know if a figure will be an In-Game Variant?

If you're looking at the figure in its packaging, there are a few ways to know that it will be an In-Game Variant.

1) It will be officially named. All of the In-Game Variants have been officially named by Activision and therefore the name will appear on the packaging. So this includes variants such as Nitro, Legendary, and Jade.

NOTE: There is one exception to this rule. The exception is Snowderdash. Although the name, Snowderdash, appears on the packaging, it is actually a Chase Variant.

2) The box art will feature the variant colors.

Below you can see that Blue Bash on the right IS NOT an In-Game Variant. He does not have an official name and the box art shows the standard Series 1 figure.

Now if we take a look at Flashwing, you can see that Jade Flashwing on the right IS an In-Game Variant. She has the official name of Jade Flashwing print on the box and the box art shows off her new Jade coloring. How can I tell if a loose figure is an In-Game Variant?

Now if you're in a situation where you're buying used figures (so you don't have access to the packaging) or you're just not quite sure about a figure, no worries. Come right back here to SCL and I'll be able to help you out.

On each game's page I have the variants split up into two groups (In-Game and Chase). You can find those pages here:

Or you can head straight to the figure's individual page. In the Basic Info section you will be able to find the Variant Type.