While the Variants make up the bulk of the rare Skylanders, there are a few more hard-to-find Skylanders that are worth mentioning.

Each year there a few Skylanders that are harder to find than others. If you don't pay close attention to how and when figures are packaged and shipped, you could be left out in the cold.

Series 2 Bash came out in Skylanders Giants. He shipped in Wave 2 which came out in October. However, unlike the rest of the figures in Wave 2, Bash was never replenished in a later Wave.

So if you didn't get him when Wave 2 was released, chances are pretty good that you missed out on getting him at the retail level. Thankfully, S2 Bash does pop up in the secondary market quite frequently and over the years the price has come down. Although the current asking price is still well above original retail price. The rarity of Magna Charge is very similar to that of Series 2 Bash. He was release in Wave 1, but then was the only figure never to be replenished in a later Wave.

Unlike S2 Bash though, the price of Manga Charge was never quite as high. This is most likely due to the fact that there was a variant, Nitro Magna Charge (Target Exclusive), that was able to satisfy some players needs. Obviously collectors wanted to have both versions, but it would suffice for the casual player. Scratch is rare for a whole host of different reasons. These include: Krypt King is the Magna Charge of Trap Team. He was released in Wave 1 and was never seen again. Krypt King also received the Nitro variant, but most people seemed to prefer the original coloring.

Additionally, Krypt King was packed 2 per case. Most figures get 3 or 4 figures per case (of 12), but Krypt King only got two. The other more plentiful figures in the case also got restocked in later Waves. This only helped to make Krypt King seem even more rare. For the first few months Wallop was even more rare than Krypt King. He also shipped in Wave 1, but was only packed 1 per case!

Thankfully Wallop was restocked in Wave 3, but those quickly sold out as many fans had been hunting for him since Day 1. It also didn't help that the other Earth Trap Master (Head Rush) turned out to be a rather unpopular character. Echo unfortunately suffered from a little bit of everything I've mentioned above.

Echo was a late release (Wave 4). Echo was packed 2 per case. Echo was a female character that many considered overpowered.

Basically, from a collecting standpoint, Echo had everything going against her.

If you’ve been around Skylanders for a while, there’s a good chance that you’ve heard of the Forgotten 8. These are the eight Series 1 Skylanders from Spyro’s Adventure that did not receive a Series 2 repose for Skylanders Giants. Boomer is usually considered the second rarest of the eight. Through some combination of poor character design and weak game play, Boomer quickly became an outcast. For a long time during Spyro's Adventure, Boomer was actually a shelf-warmer.

It wasn’t really until Giants was released and people decided that these figures were worth collecting that Boomer’s “popularity” exploded. The shelves were emptied of Boomers and it's basically been that way ever since.

Boomer was available in both Single Packs and Triple Packs (with Prism Break and Voodood). More recently Toys R Us has occasionally been getting the Triple Pack in stock, but it is still rare. Camo can be found in both Single Packs and Triple Packs (with Ignitor and Warnado).

With the ever-growing popularity of Skylanders, Activision has decided to keep a select few from each of the earlier games in production. Camo is one of the select few. So even though he is part of the Forgotten 8, this figure has become easier to find.

If should also be noted that Camo was the first of the Forgotten 8 to receive a true Series 2 figure. Thorn Horn Camo was released with Skylanders SWAP Force. Dino-Rang can be found in both Single Packs and Triple Packs (with Zap and Hex).

With the ever-growing popularity of Skylanders, Activision has decided to keep a select few from each of the earlier games in production. Dino-Rang is one of the select few. So even though he is part of the Forgotten 8, this figure has become easier to find. The Darklight Crypt Adventure Pack was re-released brief around the time of SWAP Force, but naturally this stock did not sit on shelves for long.

So if Ghost Roaster isn’t already in your collection, this is a character that you will have to be willing to spend some money to obtain. Like Ghost Roaster, Sunburn was only available in an Adventure Pack. So while you might think that this would make Sunburn just as valuable, you’d be wrong. Sunburn’s Adventure Pack continued production long after Ghost Roaster’s. While it can be hard to find in stores, it is not yet on the same level as Darklight Crypt.

Sunburn can only be found in the Dragon’s Peak Adventure Pack. Voodood can be found in both Single Packs and Triple Packs (with Prism Break and Boomer).

While the Single Pack is easy enough to find, you can correctly assume that the Triple Pack is rare due to Boomer’s presence.

With the ever-growing popularity of Skylanders, Activision has decided to keep a select few from each of the earlier games in production. Voodood is one of the select few. So even though he is part of the Forgotten 8, this figure has become easier to find. Warnado can be found in both Single Packs and Triple Packs (with Camo and Ignitor).

With the ever-growing popularity of Skylanders, Activision has decided to keep a select few from each of the earlier games in production. Warnado is one of the select few. So even though he is part of the Forgotten 8, this figure has become easier to find.

Additionally, Warnado made an appearance in Skylanders SWAP Force as a LightCore figure. However, this is not the same as a Series 2 Figure. Camo is the member of the Forgotten 8 to receive that honor. Wham Shell can only be found in a Single Pack. Wham Shell seems slightly more rare than most of the Forgotten 8, but definitely not on the level of Boomer and Ghost Roaster.

This is most likely due to some combination of his popularity and his lack of an appearance in a Triple Pack.

Like Warnado, Wham-Shell made an appearance in Skylanders SWAP Force as a LightCore figure. However, this is not the same as a Series 2 Figure. Camo is the member of the Forgotten 8 to receive that honor.

In the Spring of 2011 the Skylanders were an unknown, even in the gaming industry. Activision needed to get the word out about their new game and they chose E3 as their launch pad.

In the weeks prior to E3 they sent out Single Packs of Spyro, Gill Grunt, and Trigger Happy to industry reps they knew would be attending. Activision attached a note asking the reps to bring their figure with them to E3 and stop by the Activision booth. Since this toy/game interaction was new to the industry, no one really knew what to expect.

These figures do not vary in appearance or gameplay from the three you would have received if you bought the Spyro’s Adventure Starter Pack. The only difference is the packaging. This is the only time these three figures were seen in Single Packs. Unfortunately by now, most of these figures have been removed from their packages and you won’t be able to differentiate one from the other.

Therefore if you can find any one of these three figures in a sealed Single Pack, know that it is extremely rare and extremely valuable. It has been speculated that there were fewer of these Single Packs produced than any variant making them the rarest figures to date. I would agree. 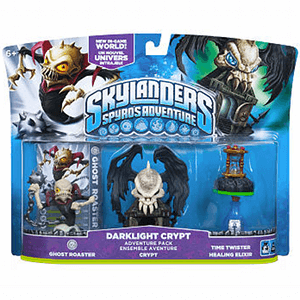 As I mentioned above with Ghost Roaster, the Darklight Crypt Adventure Pack was retired from production far before the other three Adventure Packs.

So not only is Ghost Roaster highly sought after, but the entire Darklight Crypt Adventure Pack is a valuable item.

When Whirlwind was first released, it was a Target Exclusive. Just like the store exclusives we know now (i.e. Jade Flashwing) Whirlwind was in high demand and low supply.

Eventually though the exclusivity was dropped and Whirlwind was released to all retailers. There are however two minor differences in the newer version.

First, the Target Exclusive sticker has been removed. While this is a minor packaging difference, this can be a big deal for hardcore collectors.

Secondly, the bases of the figures are painted differently. The Target version is a pure, simple white. The newer version released to all stores is airbrushed with a hint of bluish-gray.

For many these are very minor details that will go unnoticed, but the original Target Exclusive version is a rare find. If you find the right buyer, it can be quite valuable.

Naturally, the Walmart Exclusive label was removed, but more importantly the paint varies between figures.

The original Walmart exclusive is a darker red, almost burgundy color. In addition, all the gears on the base are painted completely black.

The newer version that was released to all stores is a brighter, almost candy apple red and there are a few silver or grey gears on the top of the base.

These are minor details to the average game player, but it’s a night and day difference to serious collectors. This figure is exactly the same as the original Legendary LightCore Chill (which is a Toys R Us Exclusive). This special Easter Edition Chill simply comes in a special box.

To make things more difficult for collectors though, the Easter Edition was only released at Toys R Us stores in the UK.

If you just need to have every possible variation, have fun hunting this one down…